Homing in on the French Connection

In Incredible India, a ‘French Haveli’ among traders can win credibility, and commerce. A homestay enterprise, so named, has given an old haveli (mansion) a new lease of life on a narrow lane of Ahmedabad’s walled city, thanks to entrepreneurs Deepali and Rajiv Patel.

“The name French Haveli is intriguing, but it has nothing to do with French colonial history—it was the traditional haveli of a Jain family built a century ago in Dhal ni Pol, an area with many Jain jewellers and mercantile families,’’ says Rajiv.

In the early 2000s, the local municipality flagged off programmes for the renovation of the historic city centre as part of an Indo-French collaborative project along with a visiting team led by Pierre Cadot and other French architects sharing their expertise with Indian counterparts.

The French team restored the haveli and lived in it till 2005. It became a residency named as Arts Reverie—run by art consultant Anupa Mehta, along with Jeremy Theophilus and Barney Hare Duke—for artists and other creative professionals.

“When she (Anupa Mehta) told us,” says Rajiv, “that she had other pressing commitments, Deepali and I decided to take over. Though my main business is real estate and construction, I have been involved for the last few years in heritage activities like the restoration of havelis, improvement of the centuries-old pols (housing clusters) and heritage walks as part of my social responsibility initiatives.” 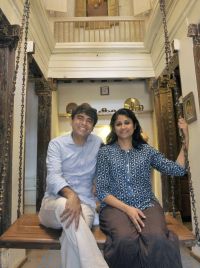 Deepali has a passion for interiors and creative enterprises, so running the haveli seemed a pleasing project for the husband-wife duo.

“We named it the French Haveli, as it is famous here as the place where the French team stayed and worked,” adds Rajiv.

The municipality launched a heritage homestay policy for the walled city, and Gujarat Tourism followed suit. Two havelis in the city, including the French Haveli, have been registered under the enterprise-friendly policies. Nevertheless, Deepali says they faced challenges in converting the attractive haveli into an establishment suitable for tourists.

“In order to meet hospitality industry standards, we needed to have private baths for each of the five rooms. This was not necessary when it was a residence and then a residency. Additional baths had to be created in a way that it was sensitive to the heritage and architecture.”

She explains, “The haveli has a sunlit chowk (central courtyard) with dung floors that needed constant attention. So we paved it with stone and tiles. We installed a retractable roof on the open courtyard. Upstairs, a large gallery with verandas, was converted into a suite with a gazebo on the balcony. For water supply, we opened up an underground tanka (traditional well-like structures for storing rainwater in havelis). The well also keeps the haveli cool. Thus, tradition and modernity meet to make the haveli livable and yet character-rich for the guest.”

The rooms are spread across the ground floor and two storeys. They boast Gujarati names—the terrace room is called Agashi (rooftop), Ordo is the name for a retiring room, Chabutro room faces a bird-feeding structure called chabutro that is a feature of pols, Malo (attic), the sole suite called Mahajan (respected person, also to denote guilds of merchants who donned administrative and philanthropic roles in the walled city).

The duo is also working on upgrading Dhal ni Pol with SEWA Foundation and Mahila Housing Trust, by encouraging and incubating heritage-sensitive enterprises. With the haveli attracting tourists thanks to travel portals and operators, the Patels hope it will be held as a pilot model for scores of other similar neighbourhoods.